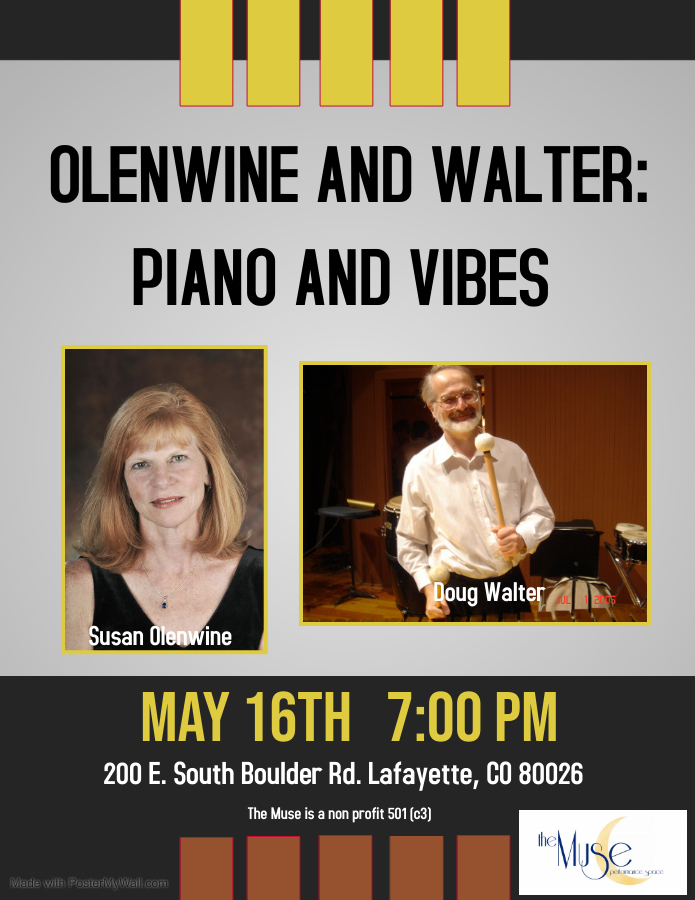 Olenwine and Walter: Piano and Vibes

Olenwine and Walter: Piano and Vibes

Susan Olenwine earned both Bachelor and Master of Music Degrees in performance at Manhattan School of Music where she studied with Constance Keene and Artur Balsam.  She had additional studies in collaborative piano with Samuel Sanders at the Juilliard School, and earned an additional MMus in Collaborative Piano at CU Boulder. A longtime resident of Connecticut, Ms. Olenwine was well known in the Greater New Haven area as a recitalist and collaborator.  In 2001 she traveled with the Yale Alumni Chorus to Russia, England, and Wales and was the featured soloist with the Bolshoi Orchestra in Tchaikovsky Hall, and with London’s Royal Philharmonic in St. Paul’s Cathedral.  She also concertized in Austria and Denmark appearing as soloist there with the United States Air Forces Band, Glenn Miller’s legacy.  She was the pianist of the Bridgeport Symphony and Orchestra New England, and performed concerti with regional symphonies. Currently the pianist for the Boulder Chorale and Longmont Symphony, she has been active as a freelance pianist, staff pianist at Metro State University and CU, on the teaching faculty of the Center for Musical Arts and Rocky Ridge Festival School.

The first vibraphonist to win NYC’s most prestigious music competition, the Concert Artists Guild Competition, Doug Walter‘s smart international reputation on marimba and vibraphone is for both classical and jazz music.    He has performed over 300 solo recitals and sixteen different concerti in Belgium, Brazil, Canada, England, France, Greece, Lithuania, Norway, Switzerland, Ukraine and the USA.  His CAG debut recital in Carnegie Recital Hall received a favorable review in the NY Times, especially for the premier of David Samuels’ SOARING!, commissioned by the CAG for him.   His three PASIC solo recitals with both jazz and classical music received standing ovations.

This concert will be streamed from the Muse. It will be available to view on FB Live https://www.facebook.com/clareandpete/live/
and Youtube: https://www.youtube.com/channel/UConnfsa0T77NKKxfsp6aMx